Which programming language will be the most popular in 2017? What skills will prove to be the highest paying? What competences will be sought-after by companies and institutions among candidates for jobs in the IT sector? Here we have top 10 programming langauges for you to check out!

We will find out knowledge of which programming languages will prove to be the most lucrative in the US this year. We will look closely at the United States, as this is where the market for new technologies is growing the fastest. It is in Silicon Valley where trends are created that have an impact on the rest of the world. This is also the market that has been the most thoroughly studied and attracts the interest of both large companies and skilled IT employees.

The world is changing very fast. One technology is replaced with another. Some tools supported by large corporations may constantly develop. Others fall into oblivion when they prove less efficient, fast and useful. Creating a ranking of the highest paying programming languages is not about stating that PHP is better than Matlab and Java Script than Python. Tools that are the most popular among developers may differ from those that are really sought-after by the labour market. Higher technical schools have always supported languages such as Java, C++ or Matlab. Computing graduates usually present very high level of programming skills in these languages. However, this is the market that decides whether these abilities will be useful and needed.

Programming languages - how many of them are there?

We do not know the final and complete list of currently existing programming languages. Not only that, we believe that creating such a complete list would not make sense at all. According to some sources there are e.g. 256 programming languages. The author of the compilation used the data available on GitHub and TIOBE. However, this is not an exhaustive list but rather a ranking of the most well-known languages. Another website presents a list of 1500 languages in which the lyrics to the song “99 bottles of beer” (an English song sung during long journeys to kill the time) were written. Most of them, however, have been created for fun and are not used by anyone.

The both lists should therefore be treated as titbits and may be used for checking with which of the listed languages we are familiar and of which we do not have the faintest idea.

In our ranking of 10 highest paying programming languages in 2017 we solely focus on popular, used and constantly developing languages.

GitHub annually publishes a popularity ranking of tools used for work by its users. In 2016, it recorded more than 19 million active repositories and nearly 6 million active users. In its official report 3 we can find such pieces of information as the most commonly used open source licenses (MIT, Apache-2.0 and GNU General Public License v3.0) and the most popular programming language (JavaScript, Java, Python, and Ruby). 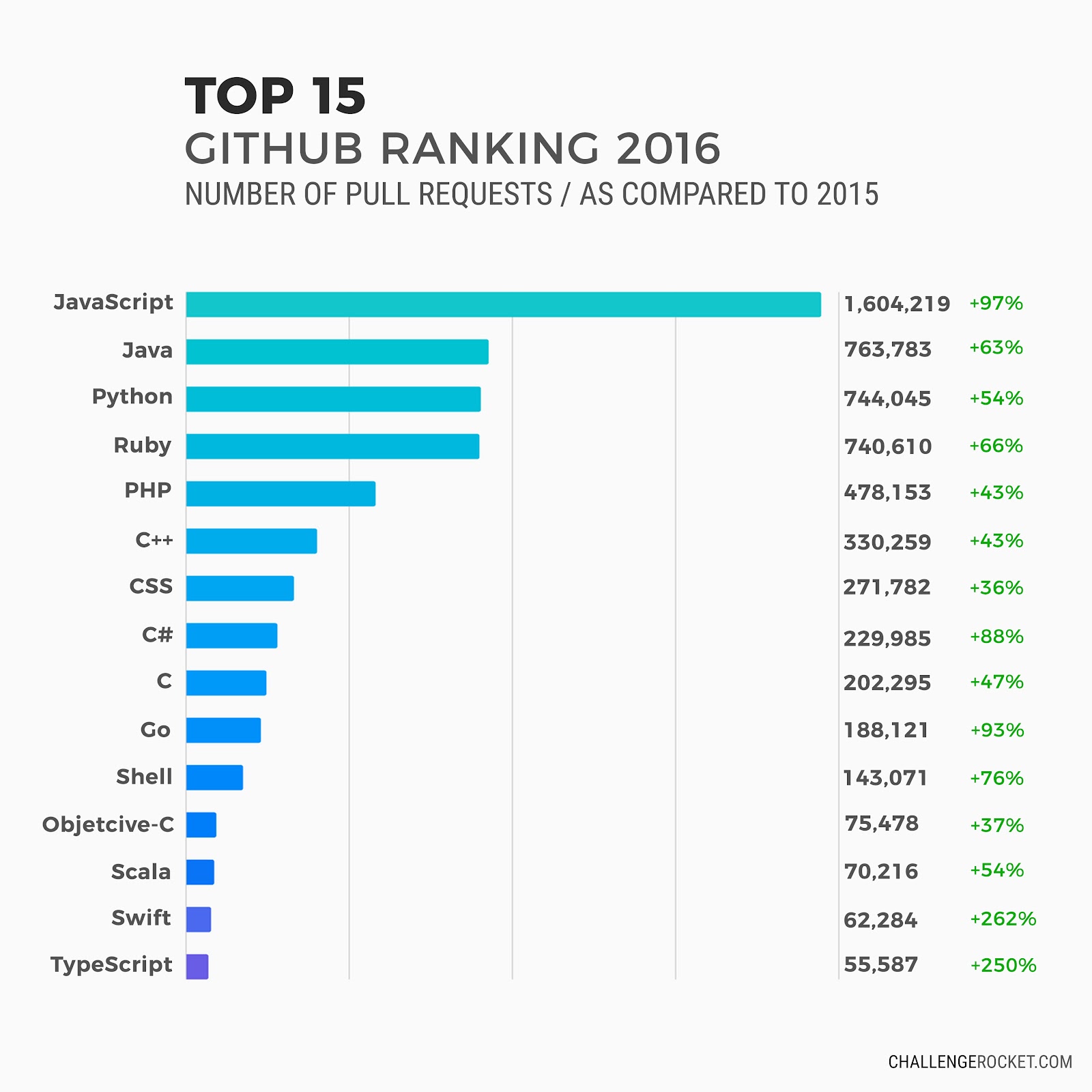 Source: Own elaboration of ChallengeRocket.com based on GitHub

TIOBE, in turn, is a Dutch company which is engaged in tracking and assessing software quality. It verifies whether specific IT systems are developed according to universally accepted standards specific to a given language. TIOBE runs an index of programming languages that are most searched in search engines. In January 2017, Java was ranked first, followed by C, and then C++ and Visual Basic Analysts point to a significant decline in C's popularity (starting from November 2015). This may be related to the fact that C is not the first language that comes to mind when we think about the creation of a new mobile application or website. The reason for the decrease in its popularity may be also that it is not developing particularly strongly and there is no large company that would promote it. 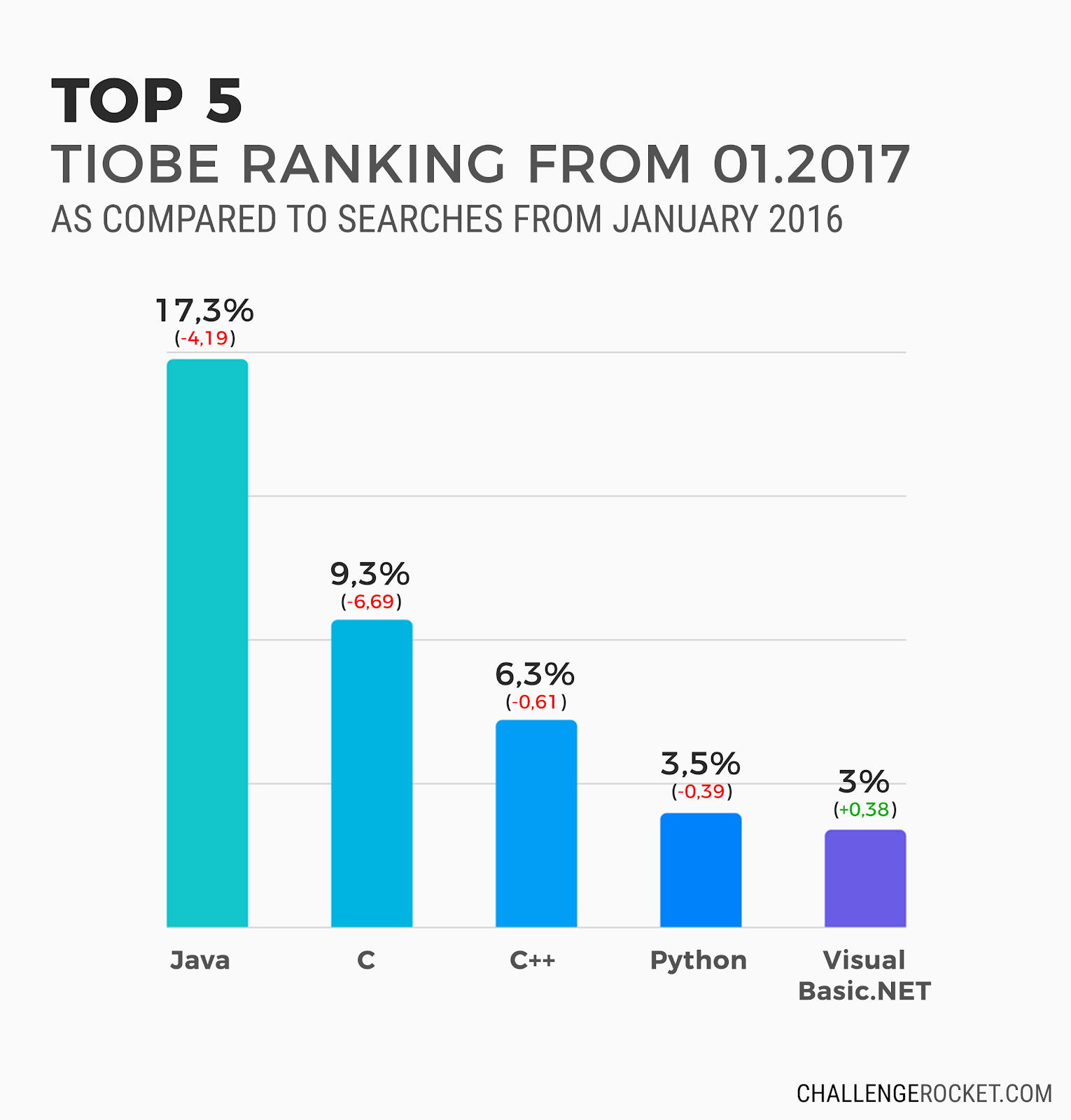 Source: Own elaboration of ChallengeRocket.com based on TIOBE

Which programming languages will be the highest paying in 2017?

In preparing the ranking of 10 programming languages with the highest salaries in 2017 we took into account all known to us lists of the most popular tools used by software developers as well as rankings of salaries that were actually noted in previous years in the US market - says Paweł Kwiatkowski, co-creator of the recruitment platform for IT professionals, challengerocket.com. In the US, more than 6 million people are employed in technology companies. Only in 2015 itself, there were 200,000 job offers in this sector. Those who have specialised in any narrow field are very likely to find a well-paid job. In the case of more common and popular skills - programmers' salaries were at a slightly lower level than earnings of those who are oriented at one of more unique programming languages.

Ranking of programming languages with the highest salaries in 2017

Developed in the '60s, IBM Structured Query Language appears in approx. 13% of job advertisements on the site paysa.com as one of the requirements for potential IT employees. This is the language for special tasks currently used to manage information in databases such as Oracle, noSQL or Microsoft SQL.

At the end of 2016 the average salary of SQL Developers in the US amounted to $71,227 per year. Given the frequency of occurrence of the above mentioned databases in many companies, organizations and institutions, experts predict that in 2017 specialists using the language in their work may expect a remuneration of even $80,000.

C Sharp has become popular due to programmers using tools developed by Microsoft, the company that also created the language more than 15 years ago. C# is known for its simplicity and widespread use. According to Quartz Media (a portal investigating trends in the technology market), the average salary of a developer specialising in the object-oriented language will amount to $89,000.

JavaScript is a very popular language believed to be easy to learn. Programmers who know it will be still sought-after in the market as it is constantly in demand in many companies. A Senior JavaScript Developer, according to the predictions of labour market and remuneration analysts, can count on an average salary of $92,000 (in the previous year it ranged within $90,000).

The R (GNU S) language is used most frequently in advanced statistical calculations. An American portal for job listings with one of the highest rates of visits (indeed.co.in), available in 50 countries in 28 languages, conducted a study in which the occurrence of the name of the programming language in available ads was counted. One of the biggest surprises was the R language which appeared as many as 11 596 times! For example: Java appeared 38 017 times and Shell was present in 4 913 ads. In January 2017, the average salary of a programmer working in R was $8,250, which gives us the annual remuneration of $99,000. Due to the relatively narrow specialization, an employee with a very good command of R and at least several years of hands-on experience may count on maintaining these rates.

C is the basis for many other programming languages, and even if programmers themselves argue whether it is still needed, companies seem to constantly see its potential. For many people, the C language is the basis of modern computing, and is extremely useful. It is the universal language, and developers who can use it proficiently are certain to find a well-paid job. According to professionals from www.business2community.com, earnings of C developers will start from $60-80,000. Taking into account the great interest in the language, HR professionals from the industry report that there is a good chance that in 2017 they will exceed $100,000 annually.

The popular scripting language used also for graphical programming, systems administration, and even for creating financial applications. It can be used in a wide variety of projects. Already in 2014, knowledge of Perl was worth (as reported by Business Insider) $82,513, and certainly a lot has changed since then. In 2017, due to the steady upward trend in earnings in the IT sector, remunerations will depend on the specific application, but programmers who specialise in this language will earn no less than $100,000.

If you want to be called a professional developer, you certainly need to know the language. C++ is best known as an efficient and flexible language used for the creation of large systems, such as desktop applications and server platforms. It is very popular and reliable. It is considered one of the best solutions for creating applications that process music and film. There is even a very extensive list of websites 7 and tools created based on C++. It is worth becoming acquainted with it. Knowledge of C++ appears as one of the main requirements in 7% of all job offers posted on the site paysa.com. Financial analysts predict that earnings in this specialization will reach at least $102,000 per year.

It is a versatile and clear language, used by the big players in the technology industry (Google, NASA). Bearing in mind that already in 2016 a software engineer with knowledge of Python could earn up to $100,000, we predict that an annual salary of a Senior Python Developer will fluctuate around the amount of $105,000 and higher. This is due in large part to the popularity of the language and its frequent appearance on lists of requirements in recruitment procedures. According to the TIOBE ranking, Python is on the 5th place in terms of number of queries in the major search engines, so the analysts assume that its popularity will continue to grow because in the past 5 years it had the largest growth rate in this aspect (exactly 6.8%, for example, PHP has -5.0%).

The primary language used by Apple developers to work on O SX and iOS. Among other reasons, due to its hermetic nature Objective-C is bound to be one of these languages that will bring developers in the US the greatest profits in 2017. At this point we cannot forget about the Swift programming language which is a relatively new alternative to Objective-C. It has gained popularity as the main language for Cocoa and Cocoa Touch, and the demand for it is growing. Its connection with Apple will certainly bring specialists working in the programming language a six-figure salary in a short time. We anticipate, however, that this will not happen in 2017. It is Objective-C, with its very strong position in Apple since 1983, that will remain sought-after. Analysts predict that the average salary for the language specialists will range from $108,000 to $112,000.

In line with a slogan: Write Once, Run Anywhere, Java has become almost an omnipresent language that can be run virtually on any platform. This means that developers highly skilled in the language may be certain to find an interesting and well-paid job. A Senior Java Developer has a real chance for a salary ranging from $74,000 to $130,000, with as much as 90% of all software developers specializing in this language approaching the top rate in 2017. It is worth noting that recruiting of employees with several years of experience in Java programming more and more often takes place during hackathons organised by companies. 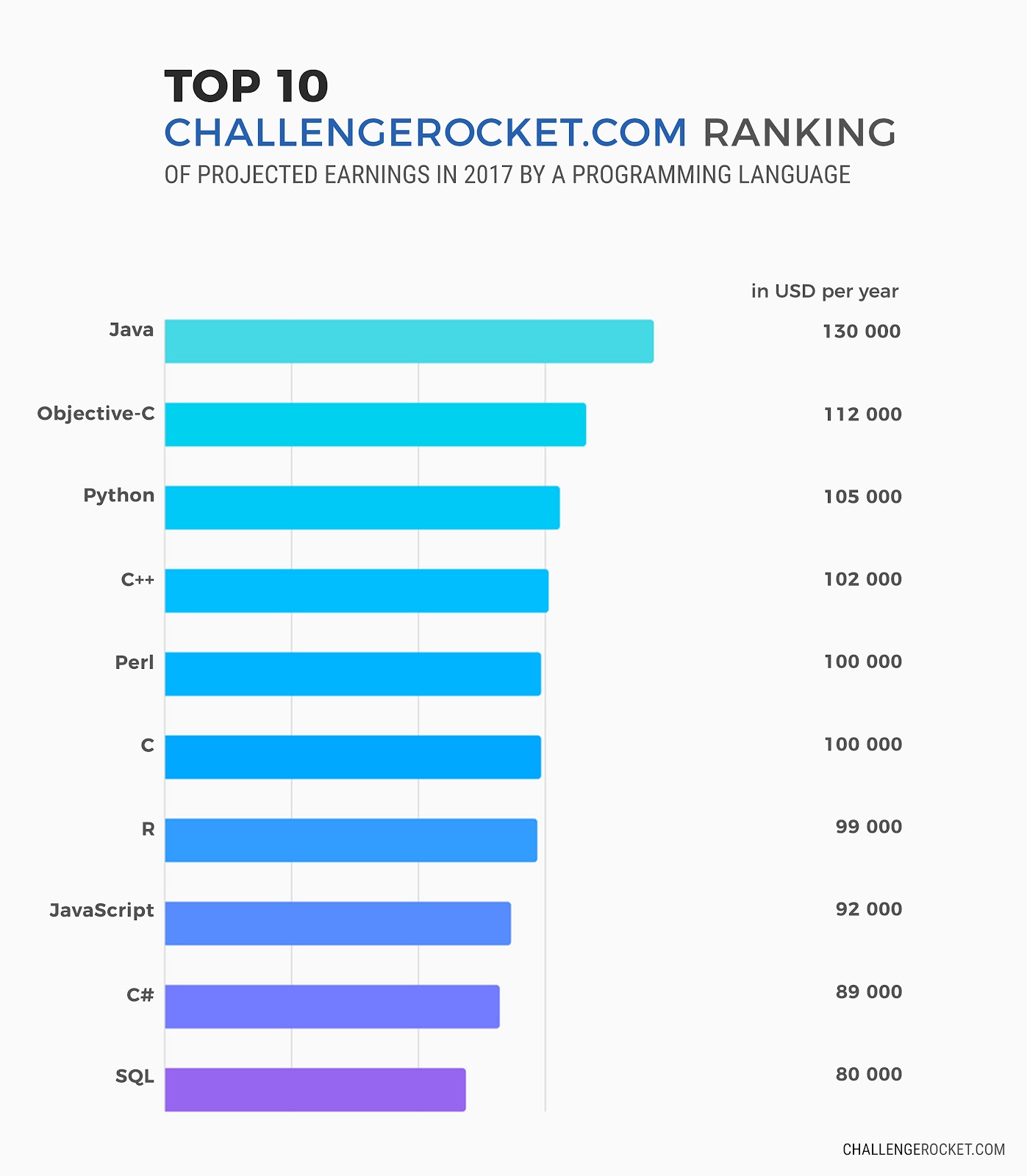 Source: Own elaboration of ChallengeRocket.com