This Challenge is completed 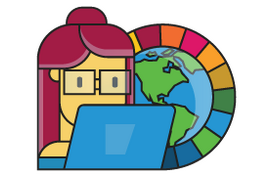 SITUATION: Crimes against women are consistently escalating to reach the alarming rates of 39 every hour in our country, India. “Cruelty by husband or his relatives” was the most reported crime against women, accounting for 33% of all crimes in 2016. Of 39,068 rape victims in 2016, 43% were girls below 18 years.
Offenders were known to the victim in 95% reported cases. Of these, 29% were “neighbours”, “known persons on promise to marry the victim” (27%) and “other known persons”(30%).The above stats clearly highlight the fact that most crimes against women are committed by people they’re closely surrounded with.And these are the ones that were reported. It’s estimated that at least twice as many go unreported, undiscussed and unstated.
ISSUE:
A large section of the Indian female population has been a victim of molestation in some form or the other , but still they find it difficult to come forward and raise their voices against it. To highlight the problem , let's take an example:
A woman suffers domestic violence where she is mistreated (even beaten up and sexually assaulted) by her husband and in-laws every other day. Being from an orthodox Indian family, she cannot go ahead and file a complaint against him out of the fear of loss of reputation of herself and her family in the society. She suffers from the pain each day and cannot voice any of it. This is infact a common situation in a country like India , where societal pressure prevents a woman from raising her voice against her molesters. Not only that, the situation is such that women in our country fear travelling alone for the fear of being molested, attacked, assaulted and even raped, especially in a city like Delhi which is notorious for being the rape capital of the country.
HOW WE THINK WE CAN HELP ?
The problem is that since many women do not wish to report the crimes against them , they live their lives with a sense of threat and fear. One thing we realized is that reporting to the police is not always something such suppressed women can garner courage to do. And even if they do, they rarely have proper backing. Let’s continue the above example for the solution we offer: Imagine that if the woman in the above case could discuss her problem to someone who could offer her expert advices specific to her situation. If there could be someone with whom she can share her problems without any fear of loss of family reputation and also with the assurance of definitely finding a solution. This is what we wish to offer.We plan to design a web portal where women will be provided a 1 to 1 advisorship by experts.
How it works ?
Whenever a woman who wishes to seek help, she registers on our platform. Then she’ll be provided with the options of connecting with an advisor. These advisors can be female social workers, lawyers, gynecologists, psychiatrists, professional counselors or survivors who can relate best with them. Accordingly, she will be connected to the most suitable advisor or according to her location and her problem. For smooth connection, we have integrated a chat-channel in our platform. Help seekers and advisors can initiate conversations on the chat-channel itself.Besides that both of them will be provided each others’ contact details so that they can meet in-person or call, whatever be necessary.
Features:

Building the idea after the campaign:
We hope to bring this idea into full action to actually help women in distress. We intend on encouraging registrations from experts, psychiatrists, gynecologists, social workers, lawyers, Non-governmental organizations, and of course survivors who are now in best position to advise others. Additionally, we’ll try to get more detailed and clean data to improve the efficiency and reliability of our star feature, ETIHAAD